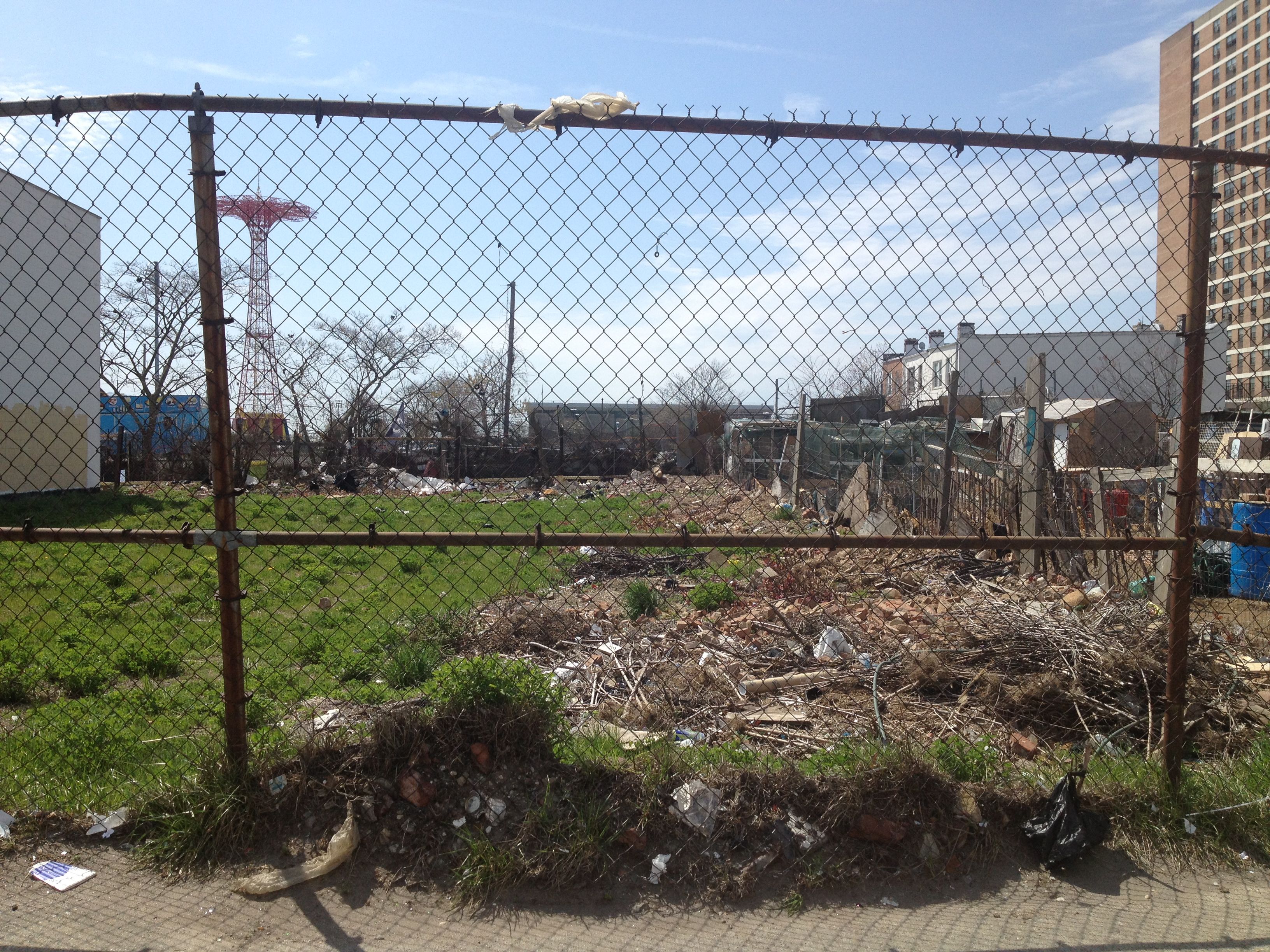 Coney Island resident Minico Roberts leads a community meeting to sign up garden volunteers. She needs at least 10 members to get the garden started. (Photo by Kaara Baptiste)

Last year, Minico Roberts, a longtime Coney Islander, started thinking about creating a new community garden in her neighborhood. She was inspired by her experience as a culinary educator at farmers markets in the Bronx and East New York.

“I was working out of [the Padre Plaza Community Garden], and I loved it. They had a youth program where youth learn about carpentry, and I felt something like that would be great in Coney Island,” says Roberts.

Last fall, Roberts, 34, walked by West 24th Street and Mermaid Avenue, Coney Island’s main business corridor, and saw the perfect spot for a garden — a corner lot that’s been vacant since she was a child. The fenced-off plot has been cleared of major debris and struggling patches of grass have sprouted, but it presents a contrast to the neat row houses and businesses nearby.

In March, Roberts received approval from the local community board to proceed with organizing the garden, which would join three others on Mermaid.

The process of converting vacant lots into community gardens can be confusing and time-consuming, but empowered locals like Roberts are determined to re-purpose the wasted lots that dot their blocks.

The city’s first official garden, Manhattan’s Bowery Houston Community Farm and Garden—now called the Liz Christy Garden—was founded in 1974, sparking a wave in neighborhoods across the city where residents decided to reclaim abandoned lots that had become breeding grounds for litter, rodents and crime. Now there are more than 500 community gardens in New York City, according to the Department of Parks & Recreation.

The plot Roberts is eyeing is one of 11 vacant lots on Mermaid Avenue. Some of the Mermaid vacancies occurred after Hurricane Sandy gutted the area in 2012, but most have been empty much longer, says Eric Levy, staff member at Astella Development Corporation, a housing and economic development nonprofit in Coney Island.

“There’s a bunch of vacancies and no one wants to build on them,” says Levy. “I don’t get it.”

The Department of Housing Preservation & Development (HPD) owns two of the lots, but the other owners have been hard to identify. Fortunately, Roberts found the owner of the plot she wants: HPD has owned it since 1983 and plans to build single- or two-family homes there in 2016, but has no financing. Owners are often willing to lend their land for temporary use while they secure money.

Even with community board approval, it will take time before the garden, which Roberts has named Mindful Living Community Garden, blooms into fruition.

The process for filing an official application with GreenThumb, part of the Parks Department, can take anywhere from three months to two years, says Mary Elizabeth Prall, a community organizer from 596 Acres, a community land access advocacy group that helps residents transform vacant public lots. They have been instrumental in helping Roberts navigate the approval process.

Still, the wait is worth it, says Chris Frank, vice president of the Vinegar Hill Community Garden in Brooklyn.

“The whole idea of taking these dead lots and filling them with gardens is genius,” he says. “But you need people willing to put in a lot of hours to make it happen.”

His group accessed its HPD-owned lot in June 2013. A team of 20 neighbors has been steadily working on the garden, using supplies provided by various nonprofits, and it opened to the public on May 10.

“It wasn’t like the city gave us a polished lot, with a shed and a water tank, beds made, and said, ‘You guys are all set up,’” Frank says. “And no one knew how to do all that.”

Frank hopes the garden will facilitate revitalization as well as community building; he’s already established collaborations with a local school, a halfway house and residents of the nearby Farragut Houses.

“Once the garden opens, I hope to get a nice mix of the communities that have been pretty much walled off,” he says.

“Especially for lower income areas where there isn’t a ton of parkland and access to fresh healthy food,” says Fisher. “It can become a safe and clean space for people to gather.”

Beyond beautification and food production, Roberts wants to educate community members about food access disparity and health issues in Coney Island, with nutritional lessons featuring ingredients from the garden.

“There’s not much attention on nutrition and access to really quality produce and groceries [here],” she says.

Roberts has been recruiting neighbors at community meetings, putting up fliers in the neighborhood and even stopping people in her building and on the street. Though she has a small window to get the garden going before HPD plans to start building in 2016, she is set on her goal.

“People have been receptive,” she says. “I’m being optimistic, so I can just forge ahead.”

This piece was originally posted on desertednyc.com. Deserted NYC: Inside the City’s Ruined and Reclaimed Spaces is a product of the NYCity News Service at the CUNY Graduate School of Journalism.