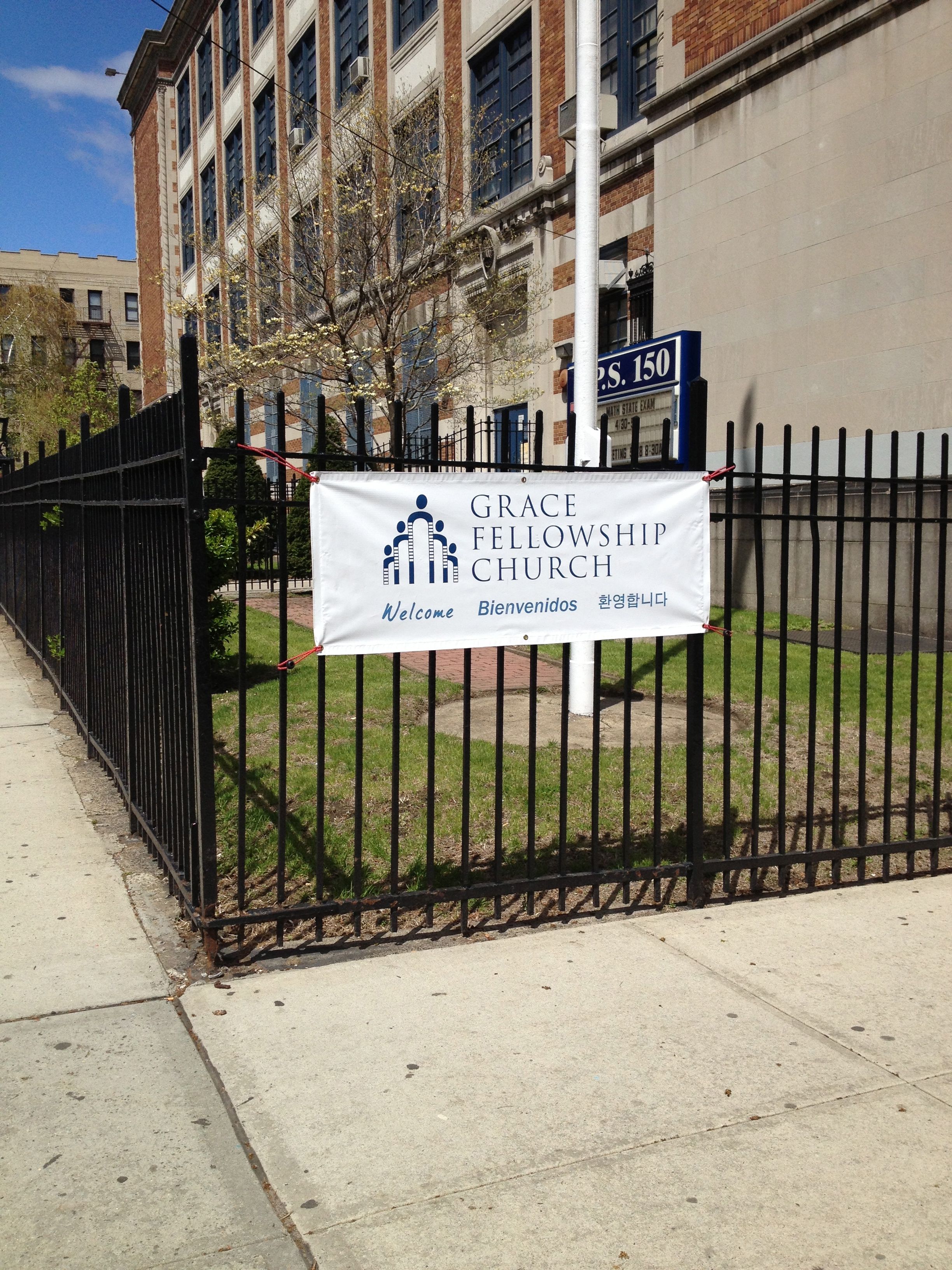 For the  audio version of this story, click here

The Grace Fellowship Church in Woodside, Queens has leased space at P.S. 150 for eight years. On Sundays, the 100+ congregation is in and out of the space in four hours. Photo by Kaara Baptiste.

As soon as Sunday worship service ends at the Grace Fellowship Church, volunteers swiftly move into action. They break down projectors, pack up equipment and pick up forgotten programs. In what is obviously a rehearsed process, they return their morning sanctuary, within minutes, to its original space: a school auditorium.

Eight years ago, the Sunnyside, Queens congregation began meeting at P.S. 150 after researching options for the expanding group. Each week since, anywhere from 110 to 150 members show up for the 10:30am Sunday service.

“It was good space, and it was in the neighborhood,” said Storck who has pastored the church for five years. “[We’re] a Sunnyside church so it was important to find a location [here].”

But in early April, Grace Fellowship and dozens of New York City churches faced an uncertain future after the Second Circuit Court ruled that the Department of Education could prohibit religious groups from renting public school space for weekend services. Now, opponents have appealed the entire Second Circuit to rehear the case, a bid that could take this to the Supreme Court.

The decision was the latest volley in a nearly 20-year-old legal saga known as Bronx Household of Faith v Board of Education, after the DOE denied the Bronx church’s request to hold weekly services in 1995. The concern is whether providing churches access for services violates the Constitution’s rule against government establishing religion.

Attorney Jordan Lorence, from Christian nonprofit agency Alliance Defending Freedom, represented Bronx Household of Faith from the beginning of the case. He says the real issue is equality in how policies are applied to religious institutions. He believes denying religious groups access is a misguided attempt to defend the Constitution.

“At stake is this erroneous concept that the government shows that it’s neutral towards religion by treating religion worse than everybody else,” he says.

Reverend NJ L’Heureux, executive director of the Queens Federation of Churches, agrees and says churches who are willing to pay the same rental fees as other organizations, should not be restricted from public school spaces due to religion.

“How [an organization] uses the space should not matter,” he says. “If the block association meets, churches should be able to meet. Most cities have no problems with this.”

Lawyers on both sides of the issue say the DOE prohibition is unique. But Lorence says DOE fears are unfounded, considering other school districts have no issues sharing public space with religious groups.

“Those are concerns that no other major school district in the country shares,” he says,. “Of those 50 largest school districts, a religious institution can rent an empty government school building for worship service in every one. Except for New York City.”

This is according to a survey ADF conducted of equal access policies across the nation as part of the lawsuit.

Involuntary proselytization and religious domination of schools are legitimate concerns, says Seth Marnin, associate director at the Anti-Defamation League. One of the biggest reasons to worry: it sends conflicting messages to children, he says.

“We’re talking about pretty young children,” he says, “who are more likely to be confused when their public school is also the church they go to on Sunday.”

But some church leaders say the DOE is not playing fair, trying to push churches out of empty schools on weekends while simultaneously leasing space in churches for classrooms.

“When the BOE has need for additional space for classrooms, they have not been bashful about using churches,” says L’Heureux.

Monisgnor Ferrari, of the St. Teresa Church in Woodside, Queens says the parish recently signed a 20-year lease with the city to use their elementary school.

“It’s been closed as parochial school for the past eight years,” he said. “P.S. 199 has been renting pne floor for Kindergarten classes for eight years.”

As of June, the building will be leased to the Department of School Construction and then to the Board of Education. Ferrari did not know which school would occupy the space.

The DOE does lease space from churches and parochial schools, says Harry Hartfield, a spokesperson for the department, usually for emergency situations. He didn’t have an exact number but said it was “small compared to 1,200 school sites throughout the city.”

Still, church defenders wonder if there’s a difference between the two.

“I’m biased,” says Pastor Storck, “but five days a week in a church for classes, as opposed to a few hours of church in a school? That doesn’t seem consistent in my mind.”

Besides a few banners and a sandwich board near P.S. 150’s entrance, it’s hard to tell there’s a church service going on inside. In its history at the school, Storck says he hadn’t received any complaints about their presence until a few years ago, when the court case made news, sparking some chatter on a local news site.

“I saw a few comments on there from people who, admittedly, did not even know there was a church meeting here,” he says. “But once they found out, it created a problem.”

One Sunday, security had to remove someone who came to the school to deliberately disrupt services.

Sean O’Connell and his wife, Melissa, are parents of a second and fourth grader at P.S. 150. They have no problem with a church using the space on the weekend.

“Our family has never experienced any encroachment on our beliefs or thinking on religious manners,” says O Connell, a PTA board member. He is an atheist; his wife is Jewish.

“We think the practice of renting out public school space when school is not in session is clearly a community win-win,” he says.  “The [DOE] gets to raise money by renting out idle space and our neighbors are able to freely and openly practice their faith, whatever it may be.”

Momentum may be on the side of religious groups, for now. Since the court’s ruling, Mayor de Blasio has expressed his support of churches using public school space, in a drastic shift from his predecessor, Michael Bloomberg. The latest appeal to rehear the case allows affected churches, many located in poor communities with limited options, to continue meeting in public schools.

So it’s back to a very familiar waiting game for those involved with the case.

“My daughter is going to law school, “ attorney Jordan Lorence said, “ and I sometimes wonder if she’s going to inherit this case from me.”

The Grace Fellowship Church has been meeting in P.S.150 the past eight years. On a typical Sunday morning, the congregation of 100+ is in and out of the space in four hours. Photo by Kaara Baptiste.