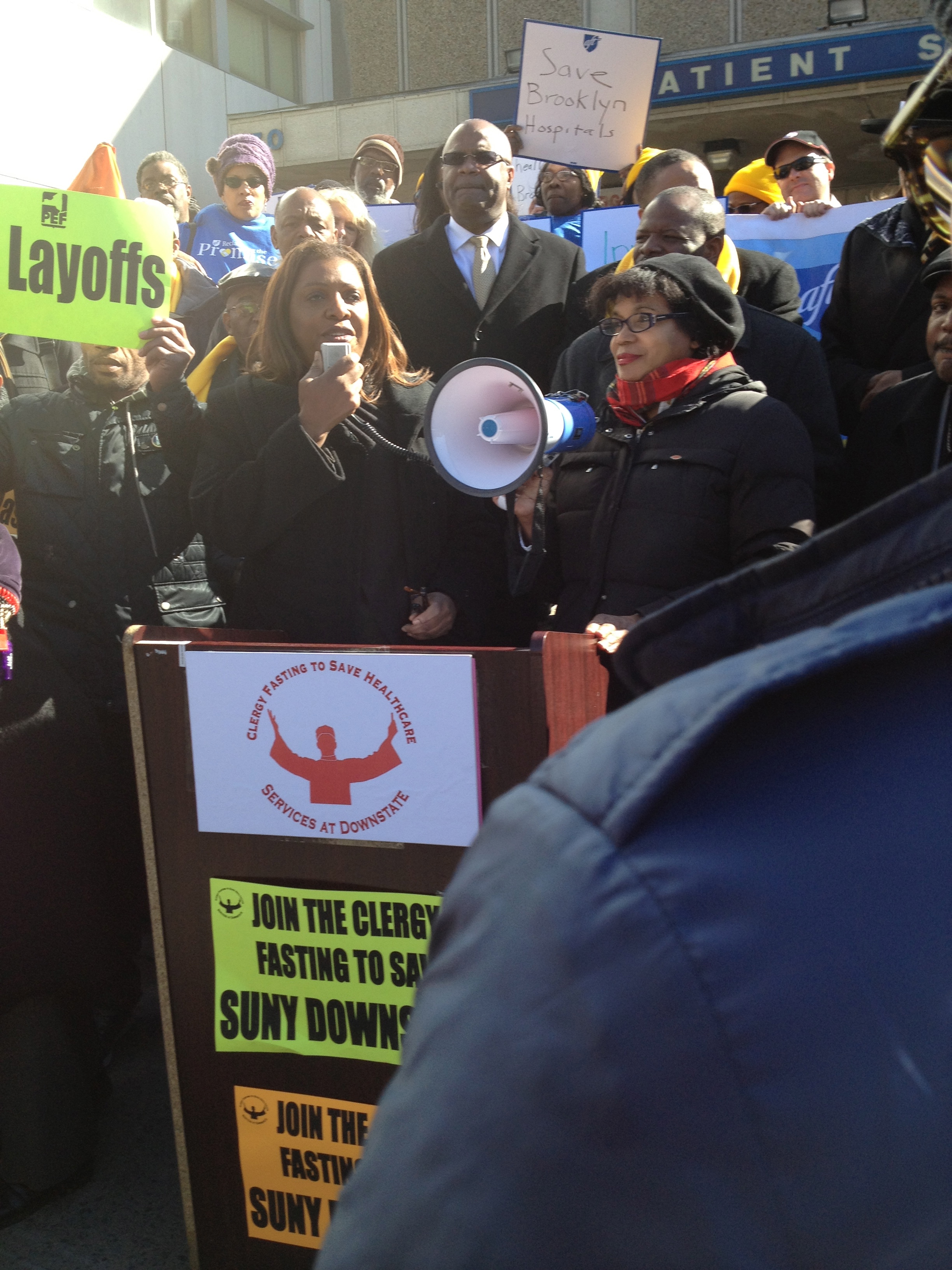 Prayers are going up to keep a local hospital from shutting down.

On Tuesday afternoon, a coalition of religious leaders from various faiths wrapped up a 48-hour fast intended to keep SUNY Downstate Medical Center active in Brooklyn.

The SUNY Downstate Coalition of Faith, Labor, and Community Leaders kicked off the fast with a lively rally on Sunday in front of the Downstate building on Clarkson Avenue.

The coalition, composed of different Brooklyn-area religious organizations, community groups and unions, has been lobbying for two years to keep Downstate as a full-service, public teaching hospital.

The group is calling on Governor Cuomo and state legislators to increase funding for Downstate in the new state budget slated to take effect on April 1. The hospital has been strapped for funds, and since the last year’s budget impasse, has lost 1,000 employees through layoffs or attrition, according to Bishop Orlando Findlayter of New Hope Christian Fellowship.

At the kickoff rally, Public Advocate Letitia James pointed out that SUNY Downstate is not just a hospital but also a teaching institution producing one out of four doctors in Brooklyn and graduating more doctors of color than any other medical school in New York. She said the Downstate predicament is indicative of a lack of investment in Brooklyn’s hospitals and the communities they serve.

“For far too long we’ve disinvested in the hospitals in Brooklyn and that’s why so many are in trouble,” she said. “We have not received our fair share of funding. Brooklyn is experiencing an explosion of residents. Now is not the time to close hospitals down.” James then led the crowd in chants of “Build it up!”

“We cannot be so focused on Troy, New York—Upstate– that we can’t be focused on those who need healthcare on Troy Avenue in Brooklyn, in Downstate,” he said

Randi Weingarten, American Federation of Teachers National President, also joined the rally. Though AFT has supported the coalition and community efforts the past two years, she said it was important to join what she called “the start of a moral moment” in the movement.

“It’s about reclaiming the promise of affordable, accessible healthcare,” she said. “If others want to walk the walk of the Affordable Care Act, we need to invest in this hospital and medical school to help this be the anchor of community medicine in this neighborhood, and borough. “

Leaders from the Brooklyn chapter of NAACP, PEF, CSEA and other religious leaders also spoke at the rally. When it ended, coalition members headed to two trailers stationed outside Downstate Hospital where they would reside during the two-day fast.

SUNY Downstate is just the latest in a series of hospital closings and privatizations that have already occurred or are being planned in New York City.

Next Generation Drum Corps from the Maranatha Seventh-day Adventist Church played during the rally.