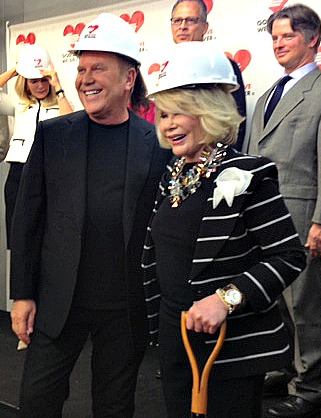 Fashion designer Michael Kors and comedian Joan Rivers were on hand for the groundbreaking of God’s Love We Deliver’s building expansion. The nonprofit, which cooks and delivers meals to those who are ill, will expand their current SoHo facility to more than double its current space. The building will be named after Kors, a God’s Love board member, who gave a $5 million gift towards the new building.

“To have this building, which means we’ll be able to help God’s Love provide even more meals to those in need, is extremely gratifying to me,” Kors said.

Kors, who has supported God’s Love for over 20 years, said the group’s work was personal because it began at a time when friends and fashion industry colleagues were dying of AIDS.

CEO and President, Karen Pearl, said God’s Love launched a  $30 million capital campaign to fund the expansion. The new building will include a state-of-the-art kitchen and expanded delivery and storage areas. The increased capacity will allow the program to double its output to 2 million meals a year.

Vice Chairwoman Blaine Trump marveled at how far the group had come from its beginnings in a church basement in Manhattan, when they served just six meals their first day.

“Our first building was the West Park Presbyterian Church. We had 1 van, 1 chef, and 1 driver,” she said.

They moved into the current facility on Spring Street in 1993.

Demand for meals increased by more than 60% in the last five years, and Pearl said expansion was critical for the program to meet the need and ensure no one was left on a waiting list.

“From our first delivery 28 years ago emerged a philosophy we haven’t wavered from—that being sick and hungry is a crisis that demands an immediate response, at no cost, with no waiting list.”

The expansion has its detractors.  South Village Neighbors, a neighborhood group, is opposed to the organization’s expansion plans and sale of air rights to a developer. Quinlan Development Group and partner, Tavros Development Partners, plan on building a condo next to the God’s Love building.

Fashion designer Michael Kors and Comedian Joan Rivers spoke at the groundbreaking ceremony today. Both are longtime supporters of God’s Love We Deliver.

Stuart A. Klein, a land-use lawyer representing South Village Neighbors, said the group’s challenge focuses on the air rights sale. The New York Times reported earlier this year that God’s Love, as a community use facility, was prohibited from selling the building for market value when it originally purchased the building in 1992; but the city ruled the restriction did not apply to air rights.

“ We don’t believe the building can take advantage of the air rights because God’s Love We Deliver was restricted to a community use facility,” Klein said.

“Allowing God’s Love to grant air rights to a money-making  [venture] is unfair.”

Klein said his client plans to mount a legal challenge once the developer’s plans are officially approved and permits are filed.

The God’s Love expansion is expected to be completed in late 2014 or early 2015. The organization has temporarily relocated to a Brooklyn facility during the renovation.